The Relative Significance of EPAs in Asia-Pacific

Feb 20 Posted by Ms Nor Irdawaty Jibani in PECC Forum

Summary
Quantitative studies using an economic model show the Trans-Pacific Partnership (TPP) and Regional Comprehensive Economic Partnership (RCEP) complement each other rather than be competitors toward the establishment of the Free Trade Area of the Asia-Pacific (FTAAP).  Breaking down the sources of those macroeconomic benefits by the policy measures of Asia-Pacific Economic Cooperation (APEC) member economies showed that the contribution by China would be the largest.  Nonetheless, in many countries of Association of South‐East Asian Nations (ASEAN) and outside this region, contributions by a country’s own initiatives will be much larger than those by its trade partners, including China.  Meanwhile, larger economic benefits are expected from NTMs reductions in addition to tariff removals.  It is thus suggested that domestic reforms are essential in order to enjoy the macroeconomic benefits of international Economic Partnership Agreements (EPAs).

1. TPP and RCEP complement
The progress of bilateral and multilateral regional EPAs has accelerated since the beginning of 2013.  In Asia-Pacific, formal negotiations on the RCEP began in May 2013, while Japan joined TPP negotiations in July of that year.  TPP ministerial meeting will be held in Singapore from 22 to 25 February. 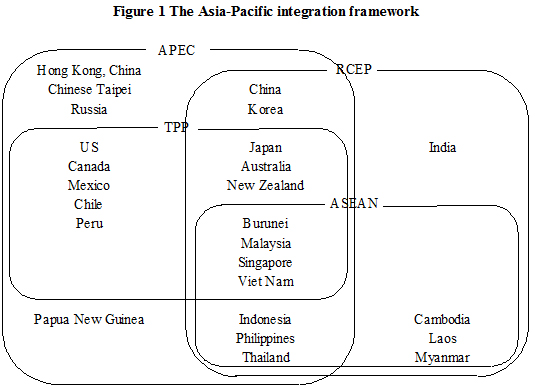 The frequently asked question about the recent framework of Asia-Pacific EPAs (Figure 1) has been whether the TPP and the RCEP are competitors or complements?    According to the estimates of the economy-wide impacts of tariff removals and reductions in non-tariff measures (NTMs) using a computable general equilibrium (CGE) model of global trade (Figure 2), the income gains of APEC economies as a whole account for 1.2 per cent of regional GDP by the TPP, 2.1 per cent by the RCEP, and 4.3 per cent by the FTAAP.  The TPP and the RCEP are shown to complement each other rather than be competitors. 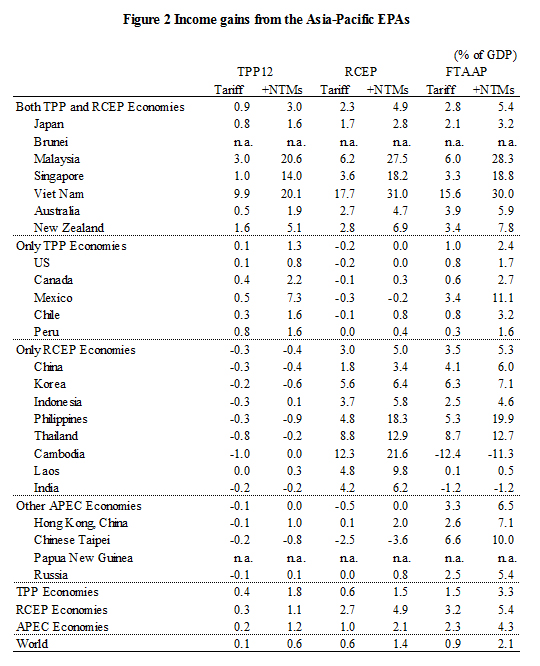 Indeed, it is generally expected that the greater the number of regional EPA members, the larger the macroeconomic benefits are.  Both the TPP and the RCEP are key elements to achieving the ultimate goal of forming the FTAAP.  Although they may compete with one another from the perspective of geopolitical interests, this will result in complementary economic benefits.

The income gains of Asia-Pacific EPAs in those EPA economies as a whole are broken down by the contribution of the EPA measures of those member economies.  It is shown that income gains from the TPP will be driven by the US, Mexico, and Malaysia, particularly by NTMs reductions.  Singapore will still significantly contribute to NTMs reductions, although tariffs may no longer be cut.  On the other hand, the contribution of Japanese tariff removals will relatively be large among TPP economies.

China will be a key driver of income gains from the RCEP followed by India, which is not an APEC economy.  The contribution of the NTMs reductions by Malaysia, Singapore, and the Philippines will also be sizable.  Further, China will generate the largest income gains from the FTAAP (Figure 3) followed by Russia, which is a member of neither the TPP nor the RCEP, and then the US.

3. Significance of domestic reforms
Leaders of TPP negotiations economies have announced in Trans-Pacific Partnership Leaders Statement on November 12, 2011 that a “common vision to establish a comprehensive, next-generation regional agreement that liberalizes trade and investment and addresses new and traditional trade issues and 21st-century challenges” for “forging close linkages among their economies, enhancing their competitiveness, benefitting their consumers, and supporting the creation and retention of jobs, higher living standards, and the reduction of poverty in their countries.”  Therefore, reductions in NTMs will be significant elements of future agreements in addition to traditional tariff removals.

The macroeconomic benefits of NTMs reduction are estimated to be generally larger than those related to tariff removals.  Moreover, they are relatively significant in developed economies compared with a number of developing and emerging economies primarily because of the degree of price changes due to tariff removals and NTMs reductions.  That said, it is indicated that there is larger room for income gains from NTMs reductions than from tariff removals, which have already been lowered as a result of recent trade liberalization.

Meanwhile, the income gains of the economies of Asia-Pacific are split between their own policy measures and those by the remaining economies of Asia-Pacific, as shown in Figure 4 for the FTAAP.  In Japan, the US, Australia, and New Zealand, larger benefits from the FTAAP will be given by their trade partners.  In China and Russia, contributions by their own policy measures and those of their partners will be similar.  However, in many ASEAN countries as well as Canada, Mexico, and Peru, contributions through their own initiatives will be much larger than those by partners.  It is thus suggested that domestic reforms in several countries are essential in order to enjoy macroeconomic benefits.

*The full studies are referred to RIETI Discussion Paper Series 14-E-009 at http://www.rieti.go.jp/en/publications/summary/14010014.html